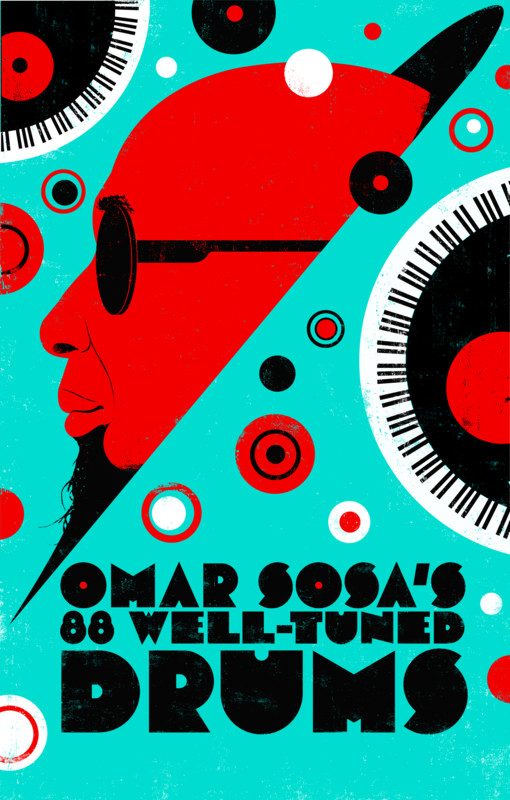 OMAR SOSA’S 88 WELL-TUNED DRUMS is a feature-length documentary film on the life and music of Cuba-born pianist and composer, Omar Sosa (b. 1965). Multiple Grammy-nominee Omar Sosa is one of the most versatile jazz artists on the scene today. He fuses a wide range of jazz, world music, and electronic elements with his native Afro-Cuban roots to create a fresh and original sound—with a Latin jazz heart.

Extensive interviews with Omar Sosa, archival video and stills, and, of course, a lot of music form the backbone of the film, with animated segments bringing bold and colorful movement to Sosa’s stories, especially early ones for which there is no supporting material. The film traces Sosa’s artistic origins from his birth and childhood in Camagüey, Cuba’s third-largest city, conservatory education at the prestigious Escuela Nacional de Música in Havana, military service in Angola during that country’s long civil war, and eventual relocation to Ecuador where, for a time, he wrote, arranged, and performed commercial jingles. Sosa’s story continues with a fateful mid-90s move to the U.S., a stint as a sought-after sideman in the Bay Area’s burgeoning Latin jazz scene, and partnership with longtime manager Scott Price that continues to this day. In his 25+ years as a solo artist, Omar Sosa has released over 30 albums and received four Grammy nominations and three Latin Grammy nominations. Often performing as many as 100 concerts across six continents annually, Sosa is known for a rhythmic style and musical influences and collaborators as diverse as his travel itinerary. As Eugene Holley writes in a 2004 Village Voice piece that inspired the film’s title, “Sosa’s pianisms evoke distant echoes of McCoy Tyner’s power, Keith Jarrett’s improvisational flights of fancy, and Thelonious Monk’s angular harmonies, transforming the piano into 88 well-tuned drums.”